Sometimes you have something to say. And sometimes it’s time to walk away and move on. But where do you go?

That is one way to describe the newest short film – and question – produced by 3 AM is the New Black and Reza Clifton called “I May Move.” The video features a short poem written by Clifton as well as photographs, drumming and an audio clip from a graduation program honoring adults and teens who completed a community-based Black Studies course on August 14, 2015 in Providence, RI. Clifton served as the graduation speaker, delivering an address she called “Getting the Revolutionary Word Heard.”

Click on the video above, or here, to view the film. Learn more about the class, talk and partners involved by visiting the links provided below.

To learn about, donate to, and read class materials from the DARE Black Studies Program
http://dareblackstudies.com/

To read the full Washington Post article referenced in the talk
http://www.washingtonpost.com/news/wonkblog/wp/2015/08/12/black-poverty-differs-from-white-poverty/

To see the “PVD Black Resistance Zine” produced by the first graduating class of the Fred Hampton Institute for Resistance
http://issuu.com/sophiarwright/docs/pvd_black_resistance_zine_-_color_-?e=18914926/15234109

For access to Reza’s “Confessions of an AmbitiousBlackFeminist” blog
http://ambitiousblackfeminist.tumblr.com/

REMIX! New Social Media and Blogging Workshop Starts Tomorrow, May 7, 2015 at AS220 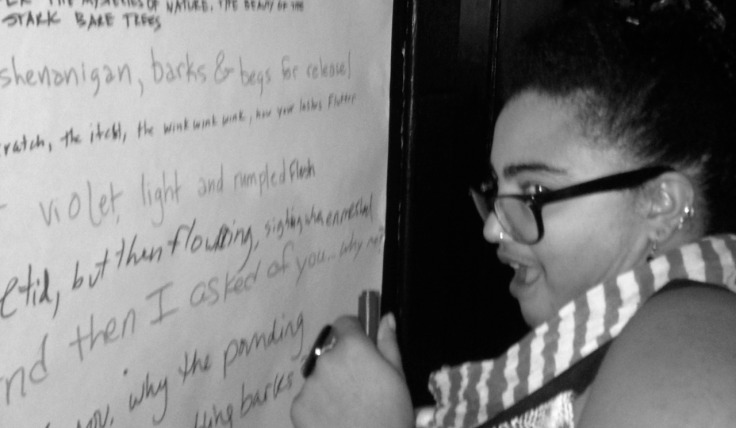 I’m super excited to present a remixed version of my social media/blogging class starting this Thursday, May 7 at 6:30p at the As220 Media Labs in downtown Providence (entrance on Lucie Way).

What’s the difference between Facebook, Twitter and Instagram? How do I start a blog and what the heck is Tumblr? What’s the right platform for sharing my talents and skills online? What’s the trick to posting daily?

These are just some of the questions I’ll explore while participants select a platform and implement my compilation of tips and best practices for showcasing art, interests and talents online.

I look forward to seeing some new faces and I hope you’ll help me spread the word.

Teaching and Learning at As220: Build a Blog Workshop Starts Today

PROVIDENCE, RI – It’s good to teach, and it’s good to learn. For me, the two often co-exist and dance together, which is why I’m so excited to be starting up a second, four-week teaching residency at AS220 starting today, Sunday February 1, noon to 1:30pm at the Media Lab at AS220 (click here for more information and to register for class).

I teach different variations of this course – offerings that range from a few minutes up to 4 months – to high school students, adults at public libraries, and professionals and practitioners at national conferences, art gatherings, and company workshops, and have done so for nearly a decade. By far, my favorite aspect of teaching and presenting on the topic of online communication tools and techniques is getting to hear people describe their ideas, talents, projects and concepts. Whether it’s a piece of history being uncovered and brought to the public, a unique technique that an artist or artisan is building a brand around, a mother or father whose insight on parenting makes sense to the non-parenting world, or a grassroots group organizing a community around toxins in homes and neighborhoods, I get to hear stories, anecdotes and questions that satisfy my curiosity and I am given early access to important data, trends and movements. Plus hearing a thank you if a tip, idea or recommendation resonates isn’t so bad either.

Apart from hearing awesome stuff (imagine if I’d just said that above), teaching these classes has often given me access to my own tutors and tutorials on social media sites that I’m not using. Pinterest and Snapchat are great examples of two platforms where I simply do not have a login (but maybe someday will). I’ve even learned more about WordPress from students – the site I reference most! It’s a very rewarding feature for me to come in as the teacher, but be treated to at least one round of being a student.

So today the cycle begins again at AS220, arguably one of the most preeminent arts organizations in Providence. I’ll be ready with my prepared lesson book and assignments for the day, because that’s what a teacher does. And I’ll come ready to listen, learn and take notes because that’s what a student does. See you there!

Click on the image above to view an online version of today’s Take 5 with Reza Rites E-newsletter. Or click here to view and print the PDF version.

These are some of the themes being explored in “Music Moves” a new photography project and multimedia installation created by “digital storyteller,” Reza Clifton, an award-winning blogger, freelance journalist and community activist from Providence, RI.

Clifton, who produces radio shows for WRIU and Brown Student and Community Radio, will also debut a short film about the project called “Romantics Never Die Because Music Moves,” which she finished earlier this month. She says the film as well as the photographs and multimedia snippets document and capture snapshots from three different types of musical projects in which she has been involved: 1) Covering musicians and cultural festivals as a journalist; 2) Organizing events and collaborating with musicians and performers as a DJ and arts programmer; and 3) Attending concerts as a consumer and live-show enthusiast.

Clifton officially launched Music Moves in February 2014 in Providence, but earlier in June she brought her work and stories to Warwick with a month-long exhibit at Warwick Public Library, 600 Sandy Lane. She will discuss the project in more detail on Thursday, June 26 at a reception being hosted by the library at 6:30 PM.

“Reza is an intelligent and ambitious artist, and we’re excited that she’s bringing her latest project to Warwick,” said Wil Gregersen, Community Services Librarian at WPL. “Her interests are wide-ranging, and her creative pursuits look for and find the shared circumstance and commonality in our human experience. I especially look forward to seeing and hearing reactions to her film after the test screening we did.”

Clifton says the film is new to the project and will be the first public screening. “It not only corresponds with the photos and stories in the exhibit,” she explained, “but it also raises awareness about challenges for women in the media.” She says she hopes the film encourages “creativity and bravery in storytelling,” through it’s use of poetry, music and different types of visuals.

In a different part of the exhibit, Clifton – who has been instrumental in local efforts around the #bringbackourgirls campaign for the 300 kidnapped schoolgirls in Nigeria – created space to raise awareness about a different issue, which she refers to as “blood cell phones,” partially in reference to the popular film “Blood Diamonds.” Through incorporating what would have been discarded CD’s into the display, says Clifton, she is asking viewers to consider the human experience of the citizens and women of the Democratic Republic of Congo, where human rights organizations say the conflict there – Africa’s longest-running civil war – has been exacerbated by tension over mining for “coltan,” a mineral found in everyday electronics and most of the world’s cell phones, computers and CD players.

Though raising awareness around humanitarian crises is important, says Clifton “Music Moves is ultimately meant to instill joy. I want to inspire viewers and participants to identify, embrace, pursue and celebrate the things they love and the things that move them.”

The reception, which includes refreshments and is free and open to the public, begins at 6:30 PM with the film scheduled to show at 7:00 PM. Directly after the film is an artist talk featuring Clifton, Gregersen and artist Simone Spruce-Torres – who also works at Warwick Museum of Art – discussing what it means to bring new art to a community. Warwick Public Library is located at 600 Sandy Lane, Warwick, RI.

Confessions of an #AmbitiousBlackFeminist
April 22, 2014

My calendar has been full of teaching, speaking, listening, reading, writing, sharing, securing, releasing and loving…

And there’s more coming up.