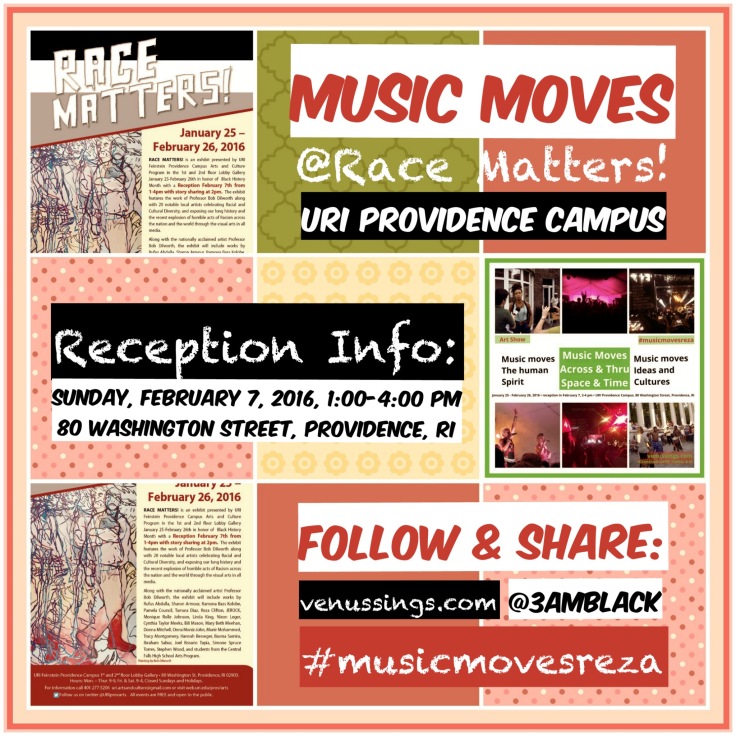 In addition to art from Reza Rites,‬ over a dozen other artists (20) have work on display in the Race Matters! show. In addition, directly following the reception on Feb 7 is a performance of “War Stories,” a performance art piece dedicated to Americans killed by racially motivated attacks.

To read a press release about the intersections and linkages between the Gallery Director’s Race Matters themes and those of my Music Moves project, which are where my photos come from, click here.

Click on on the first thumbnail image to the left to learn/read more about the Race Matters! exhibit at URI Providence Campus and on the second image to read the extended #musicmovesreza @ Race Matters! release.

Click on the thumbnails to the right to read previous press releases about Music Moves. Follow the project on social media through the hashtag #musicmovesreza or on www.VenusSings.com. 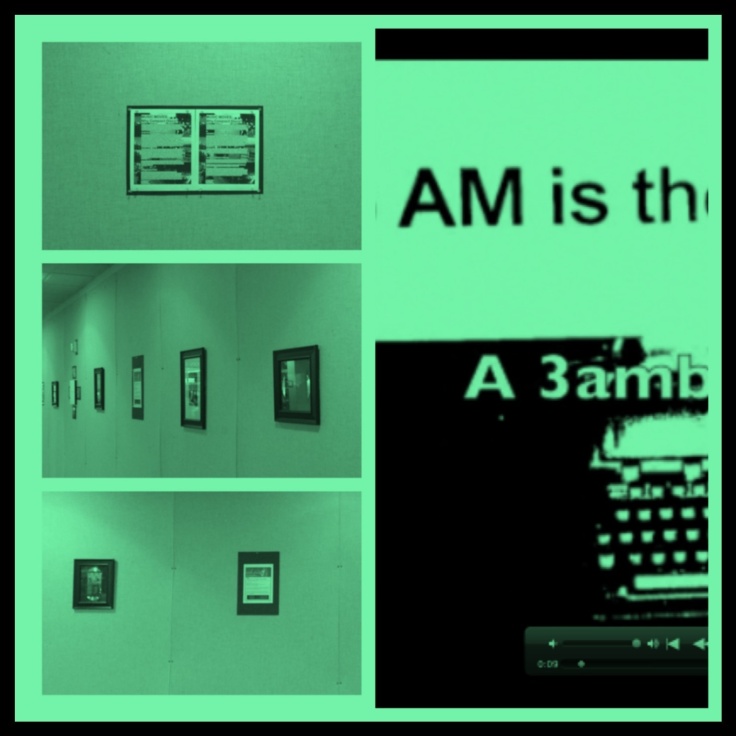 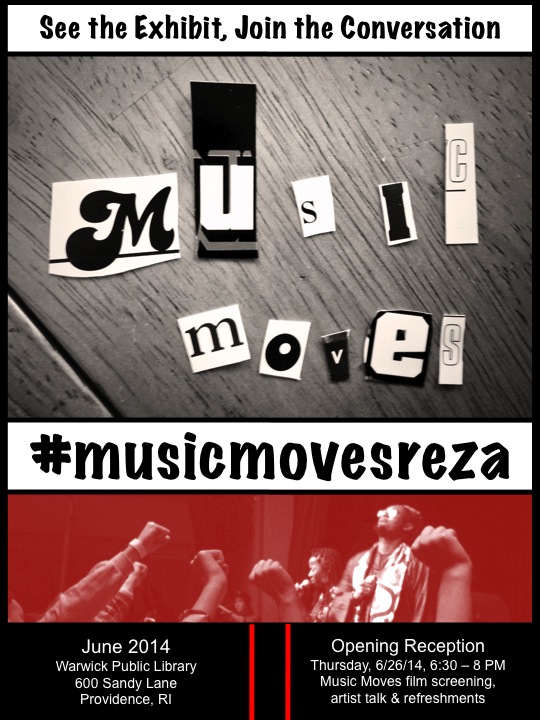 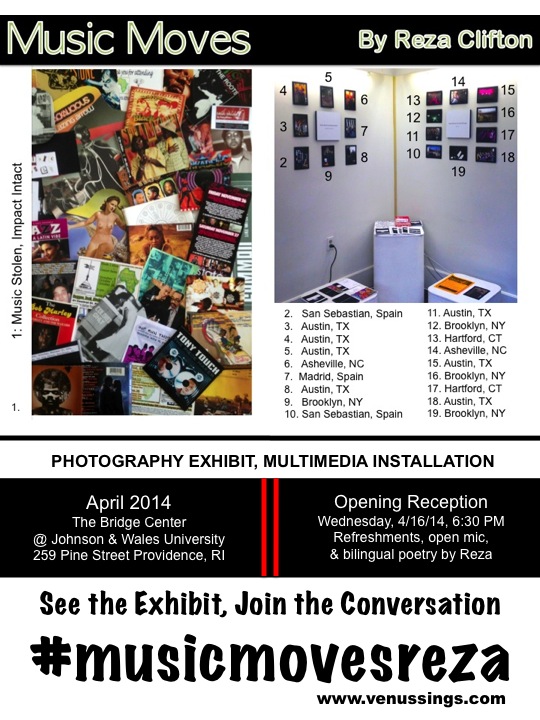 SAVE THE DATE / RECEPTION:
JWU Voices and Music Moves
A collaborative event between Reza, Sigma Lambda Upsilon
And the BRIDGE Center

Music Moves is a photography exhibit and multimedia installation by Reza C. Clifton exploring and celebrating the different effects and benefits delivered through music.

“With this exhibit, I hope to reveal an important part of who I am while also inspiring viewers and participants to identify, embrace, pursue and celebrate the things they love and the things that move them.” – Reza Clifton 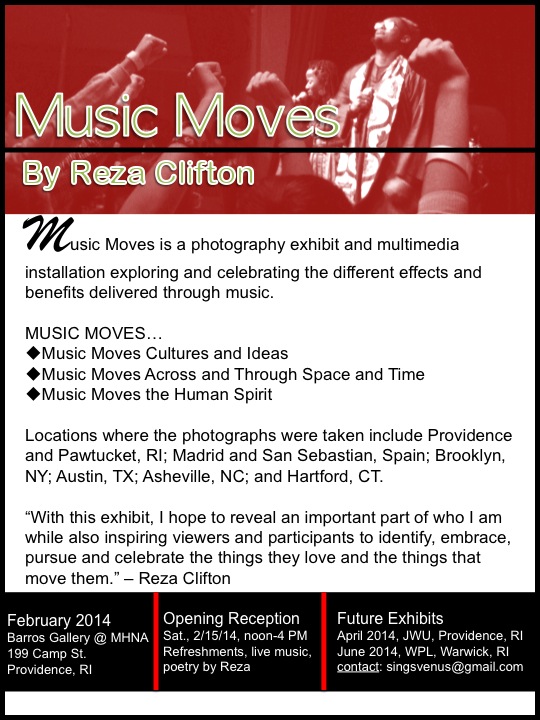 Have you had a chance to check out the new #MusicMovesReza photography exhibit?
Save the date for the next reception and show: Wednesday, April 16, 2014, 6:30 PM.

“Music Moves” features photographs, video footage and audio clips collected and recorded by Clifton through her work writing about music, organizing events, and performing as a DJ

PROVIDENCE, RI – As technology evolves, so do the ways in which we hear and enjoy music and the musicians we follow. Still, there is something to be said for the live performance; for that interaction between the performer(s) and the audience; for those opportunities to see or hear something that will never be replicated again; for those moments when you realize how many of your other senses are being activated.

Music Moves, the debut photography exhibit and multimedia installation from award winning blogger, writer and DJ, Reza Clifton, explores these ideas and the other effects and benefits delivered through music. Debuting in February 2014 at Barros Gallery at Mount Hope Neighborhood Association (300 Camp Street, Providence), Clifton has a body of photographs and multimedia selections captured during performances or in the company of musicians in cities like Providence and Pawtucket, RI; Madrid and San Sebastian, Spain; Brooklyn, NY; Austin, TX; Asheville, NC; and New Bedford, MA. “

“Music moves cultures and ideas, moves across and through space and time, and moves the human spirit,” explained Clifton of her theme. “With this exhibit,” she continued, “I hope to reveal an important part of who I am while also inspiring viewers and participants to identify, embrace, pursue and celebrate the things they love and the things that move them.”

Future exhibits and additional rollouts of the project are planned for April and June, at The Bridge Center at Johnson and Wales University and at the Warwick Public Library, respectively. She will also share selections through a zine and series of multimedia spaces she launched in the fall of 2013 under the brand “3 AM is the New Black.”

On February 15, from noon to 4 PM, Clifton will join peers, friends, family and community members for a reception and presentation of the gallery’s February artists. Clifton will also perform some of her poetry on the 15th – alongside Cedric Josey, a New Bedford, MA-based singer songwriter who will play original selections and accompany Clifton.

For more information about the exhibit or to contact Reza Clifton, email singsvenus@gmail.com or call 401-217-9680. 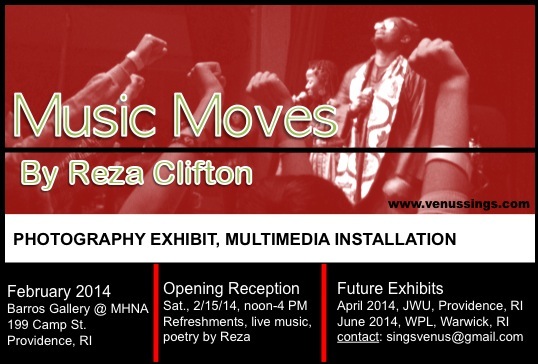